Welcome to the Scrapbook History website and blog. Here you’ll find materials on how ordinary (and extraordinary) people took media into their lives over a hundred years ago, through their scrapbooks. The site supplements my book, Writing with Scissors: American Scrapbooks from the Civil War to the Harlem Renaissance. I hope you’ll comment and contribute.

Whenever I give talks about scrapbooks in public libraries and historical societies, people walk in thinking scrapbooks are trivial, and leave astonished at what a rich history they speak for — that so many people in the 19th century made them as “unwritten histories,” and they were our ancestors way of coping with too much information. I’m delighted that the New Jersey Council for the Humanities has included my Writing with Scissors: American Scrapbooks presentation in their great catalog of Public Scholars events. Nonprofit organizations in NJ can sign up to book the talk here.

I love adding local material and inviting people to look again at scrapbooks in their families and communities. NJ author a

nd editor Jeannette Leonard Gilder kept scrapbooks and wrote about her NJ life in her memoir, The Tom-Boy at Work. Isn’t it time for your historical society to bring out its scrapbooks?

Eligible groups include libraries, historical societies, schools, universities and more. My talks are both women’s suffrage related, so qualify for organizations to go over the usual NJ Council on the Humanities limit of two talks/year. (Jeannette Gilder was actually an anti-suffragist. Yikes!)

From The Tom-Boy at Work

The full catalog of speakers is here.

I first saw a Beecher family-related scrapbook when Minton Brooks asked me to look at one now in the Brooklyn Historical Society, made by his ancestor Henry F. Minton. Henry Minton was Henry Ward Beecher’s parishioner, and had been riveted enough by

his minister’s doings in the unfolding Beecher Tilton sex scandal to compile clippings about them in his scrapbook, along with his own interests as a homeopathic doctor. It was the kind of unfolding news story that often inspired newspaper clipping scrapbook making. A scrapbook allowed you to collect all the sidepaths and follow them all across different newspapers.

But the Beechers and

Stowes and their friends themselves had different ideas of what to collect. And old newspapers could be turned into data, abolitionists realized in creating American Slavery as It Is – the book that Harriet Beecher Stowe kept under her pillow when writing Uncle Tom’s Cabin.

Alice Dunbar-Nelson, in the photo taken around 1900, which appeared in the many newspaper articles about her suffrage work in 1915.

My article in today’s Washington Post “Made by History” section, “How a new exhibit corrects our skewed understanding of women’s suffrage: Addressing racism in the suffrage movement” tells about the fabulous exhibit, “Votes for Women,” opening today at the National Portrait Gallery in Washington, DC. This exhibit avoids the narrow “Seneca Falls to 1920” framing of women’s struggles for the vote to include the activism of African American churchwomen, clubwomen, and educators, and later civil rights activists, and Native Americans and Puerto Ricans, whose timeline for getting the vote was very different.

My article focused on Alice Dunbar-Nelson, an African American writer, speaker, teacher, and all around activist, whose portrait is in the exhibit. Her story, not in the exhibit, is fascinating. I learned about her 1915 campaign tour for suffrage through her scrapbook – really the only record there is of this work. The news articles she collected about her speeches were in local papers, not digitized or even microfilmed. She was bold enough to think that evidence of her work should be saved, and savvy enough to realize that if she didn’t do it, no one else would. Her scrapbook is thus almost the only trace we have of the very particular arguments for suffrage she addressed to the black community.

If the Washington Post article whets your appetite, you can read more about Alice 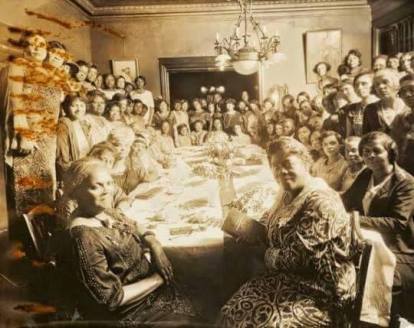 Photo of a gathering of black suffrage activist, 1917. Anyone know who is who?

Dunbar-Nelson’s suffrage work in my 2016 article, “Alice Moore Dunbar-Nelson’s Suffrage Work: The View from Her Scrapbook” Legacy: A Journal of American Women Writers, 33: 2; 310-335. If you’re not a subscriber, you’ll need access to J-Stor or ProjectMuse to get to it.

The exhibit catalog has an eye-opening essay by Martha S. Jones – essential reading on African American suffrage involvement: “The Politics of Black Womanhood, 1848-2008.”

I must get to DC! 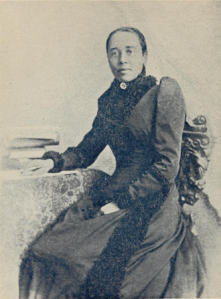 Although I keep thinking I’m done researching scrapbooks per se, heading to Oberlin reminds me that I’ve always wanted to follow up on the scrapbooks of an Oberlin alumna that I saw at Howard University’s Moorland Spingarn collection: The papers of pioneering intellectual, teacher, writer, and administrator Anna Julia Cooper there held her own scrapbooks, but also included one focused on and probably made by Charlotte Forten Grimke, 20 years older than Cooper. Grimke did not go to Oberlin, but other members of her family did.

I’m looking forward to jumping into Oberlin’s special collections, since their alumnae/i

were the leading lights of the abolitionist and women’s rights movements. They may have inherited the remains of the newspapers that Angelina and Sarah Grimke and Theodore Weld used in writing American Slavery As It Is  — an extraordinary use of Southern newspapers to argue against slavery. I’ll be speaking on Hidden Histories: African American and Women’s Rights Scrapbooks on Thursday afternoon, March 13. And I’m looking forward to a faculty workshop about archives on Friday, where I hope we’ll have a chance to discuss Elizabeth Alexander’s extraordinary essay, “My Grandmother’s Hair,” from her collection Power and Possibility: Essays, Reviews, and Interviews. It engages the intimacy and violence of the archive.

So what was an advantage did 19th century media had over ours? Their users didn’t have to worry about lost passwords. I finally made my way back to this blog! Sorry for not posting here more often recently.

I spoke at the Mexico City’s immense Universidad Nacional Autónoma de México (UNAM), in the Seminario de Bibliología, last month and heard about some interesting filmmakers’ scrapbooks there from book history scholars who hadn’t thought about scrapbooks. I also learned that Spanish has a special word for a library of periodicals: hemeroteca.

I’ll be digging in the archives on fellowship at Yale University all through April (on a nonscrapbook project) but hope to post more about related findings.

I’m delighted to be speaking November 13, 2018 at the University of Oregon in Eugene. I hope the students I speak with will go on to dig in the archives at the university, where the university special collections and archives has scrapbooks of Oregon suffragist and journalist Abigail Scott Duniway (1834-1915).

“Writing with Scissors: The American Scrapbook in the Nineteenth Century,” will start at 4:00 pm in the Humanities Center conference room (PLC 159).

Oregon women won the vote in 1912; Abigail Scott Duniway first registered to vote a few months later. This is her first voter registration card from 1913. 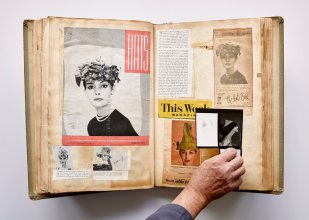 If you saw the film about him, Bill Cunningham New York, you’ll recognize his sensibility in formation here — not to mention his earlier work as a wild hat designer. I loved that his Times layouts of fashion on the street were often like something out of a Jacques Tati movie.

As Matthew Schneir notes in the article, “the scrapbooks are the world arranged by his own hand.” That is, as with the 19th century newspaper scrapbooks, they preserve a look over the maker’s shoulder. We can see Cunningham thinking about what he is clipping and arranging.

Who else wants to go over to the New-York Historical Society to see them?

I wrote Writing with Scissors to tell the story of the amazing scrapbooks ordinary people made from the newspapers they read. I am an English professor at New Jersey City University.